Defense cuts should be targeted

A friend of mine in Los Alamos, NM makes an interesting point on Facebook. He wrote: 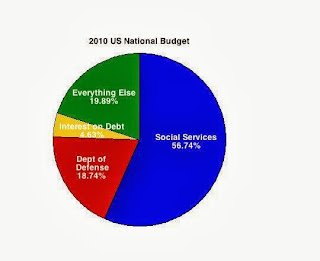 able to find complete data). The three big things that we spend money on are: social services, the military, and interest on the debt, which in total accounts for just over 80% of our national spending. Everything else that the government does (e.g. - NIH, NEA, DOE, NASA, NSF, FAA, DOI, etc...) falls under the remaining 20%. Now, let's compare this with our income: in 2010, our government had a revenue of $2.16 trillion, and they spent $3.45 trillion. Thus, even if we eliminated the 'Everything Else'category of our expenditures, we would still be overspent by $600 billion.

"The point of all of this is that (it) greatly amuses me when our elected officials start talking about the need to balance the budget, but state that we can't reduce spending on social services or the military."

Now, if my math is right, we have $64.515 billion tied up in "defense" spending, with many of the programs devoted to feeding the military-industrial complex that the late President Dwight D. Eisenhower warned us about. I am not going to break this $64 trillion down, but I would point out that former Vice President Dick Cheney's Halliburton and other well-connected firms have profited directly from the Middle East adventurism. Our country's ability to wage war far exceeds our need to wage war.

As we endure the immature, kindergarten-like behavior from the 535 politicians who, more than any other government class, suckle at our taxpaying tits, we should keep in mind where the money goes and who is hurt by where it goes.

I don't know where we're going with this government shutdown, nor do I know the repercussions for the nation and for the leeches in Congress, but I can only hope that the backlash in the mid-term elections will be severe, wide-ranging and devastating to the incumbents who are owned by the military-industrial corporatist plutocrats who "get theirs" at the expense of the least of us getting anything.

Posted by George Schwarz at 8:48 PM