It’s been about 10 months since the FBI served the Amarillo Economic Development Corp. with a 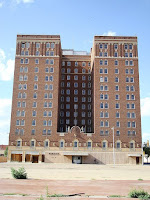 grand jury subpoena, launching a probe into some of the activities associated with the so-called downtown revitalization project. Since then, we have heard nothing about the investigation into the deal involving Alan Rhodes, a shareholder in the Underwood Law Firm, and the AEDC. The deal at issue is a transaction involving the Commerce Building, West Texas A&M University and local property owners.
Secrecy is a common characteristic of this type of scrutiny. But in addition to learning about the probe, we have learned much about the tentacles gripping downtown development:
· Alan Rhodes and Joe Bob McCartt, the husband of former Mayor Debra McCartt, are involved in a deal to invest in the Newcrest Images/Supreme Bright convention center hotel. That information became public last month despite Chuck Patel, the chief financial officer for Newcrest, telling us who are the investors in the publicly subsidized part of the project that the information is none of our business;
·Statements by the Wallace Bajjali-Downtown Amarillo Inc. crowd have claimed, in too many places to document here, that neither the Xcel Energy building now under construction nor the convention hotel would proceed without the ballpark and other guarantees. And yet we recently learned that Newcrest/Supreme Bright has told Richard Brown, the point person on the Tax Increment Reinvestment Zone, that construction begins this fall despite the vote on killing the ballpark part of the MPEV being on the ballot;
·The contract with the city of Amarillo for the heavily subsidized convention center hotel, part of the Wallace Bajjali-Downtown Amarillo Inc.-inspired trifecta that includes a ballpark and parking garage, includes a non-compete clause barring the public assistance of any type for another downtown hotel;
·The parking garage contract with the now defunct fraudster firm of Wallace Bajjali includes the city’s requirement to eliminate free street parking downtown with parking meters. One implication not fully explored at this point are the costs and scope of that requirement give nthe large area in the “downtown” definition established eight years ago;
·In a scurrilous act of betrayal of the public, the Tax Increment Reinvestment Zone has sat on the Herring Hotel’s request for a tax abatement for three years. And, in a more despicable move than a civil tongue bars other words, on Thursday finally denied the iconic hotel’s request.
What we know about FBI-grand jury investigations in general are they are carried out secretly — that neither the FBI nor grand juries make information known to the public during their process. What is less well known here is that the investigation may well delve into more than the Commerce Building. I have it on good authority that the FBI is fully aware of the situation with the Herring, including the possible anti-trust implications. Of course, no one on the outside knows about the progress or depth.
But I have a couple of theories that I have mentioned to an attorney or two and, while I may not be right about these as I was about Wallace Bajjali, those hypotheses make sense.

First, I believe the “where there’s smoke, there’s fire” cliché is plausible here. Had the federal level investigation cratered early on, it would have stopped; the public would have known, in part, with the release of information about the lack of indictments. That may be a bit simplistic, of course.

Second, I think there is a fair chance this investigation is being done under the framework of RICO, or the Racketeer Influenced and Corrupt Organizations Act. This law, born in the 1970s to for after the Mafia, covers far more than the Goodfellas these days.
As the Wallace Bajjali-Downtown Amarillo Inc. plan advocates move forward and we see Amarillo divided in a war within itself, one can only think the famous Winston Churchill line: “In wartime, truth is so precious that she should always be attended by a bodyguard of lies.”
It also brings to mind another observation about the truth: The advocates of the Wallace Bajjali-DAI plan for downtown development find the truth so precious that they use it sparingly.
I wonder when the facts will emerge to give us the truth.