Blake Farenthold is a lying propagandist 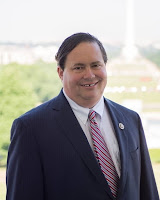 As many of my friends know, I continually wage an internal war between my wish to be thoughtful and civil in my discourse and to be vulgar and nasty, the latter tactic meant to convey the disrespect toward my target. Of course, many disagree with the bad-mannered approach, saying that it’s counterproductive.

Not long after recently settling in Victoria, Texas, which is part of the 27th Congressional District, I learned that the representative was Blake Farenthold. The more I observed his behavior, the more I realized that he is worse than a conservative Republican — he is a right-wing moron allied with the treasonous faux president currently illegitimately squatting in the White House. Like most of the “conservative” politicians today, he or his taxpayer-paid staff floods his Facebook feed with fascist propaganda and lies. Yes, lies.

Yesterday, our fubsy, fascist friend tried to perpetuate another fascist fable, proudly announcing, “I spoke with Fox News over the weekend about the upcoming investigations into the Uranium One deal.”

Anyone with any sense knows that Faux News is the radical right’s propaganda station that has, over the sad past nine months become state TV for the Putin/Bannon/Koch/Trump presidency. And for any politician to go on Fox, much less brag about it, only strengthens being complicit in the treason by this administration. But this case was different. If you watch the clip, Farenthold’s Jaba-the-Hut performance, he was an extension of the Fox/Trump disinformation machine. He was pandering and peddling a story so well and thoroughly debunked by legitimate media outlets that the only thing to call what he did was lying propaganda.

I couldn’t hold back. It triggered an explosion, with this posting to his Facebook feed and faxed to his Corpus Christi and Washington offices. In my view, I called him names I think he deserves. Other posters on his thread didn’t use my language, but they pushed back, also refuting him.

While it wasn’t the first time I attacked our fubsy fascist with vulgar invective, this time I got a reaction. One William Hill, who identified himself as associated with our fubsy fascist’s office, called me out of the blue. I was caught so surprised and off guard that it wasn’t clear what the call was about. Even less than 24 hours later, I am not sure if Hill offered me a meeting with Farenthold. Or an invite to attend some community meetings (with which I wasn’t familiar).

No, I think I’ll just sit back and see how much harm I can do to Farenthold politically.
Posted by George Schwarz at 2:51 PM