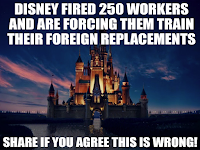 Sometimes I see something on Facebook or on the 'Net that is so outrageous, I either blow it off or try to confirm it. Blowing off some of the stuff is at our own peril and confirming the information creates angst. But it’s necessary.

So it was a little while ago when I saw something — the illustration to the left — that I thought was so outrageous that it couldn’t be true. But I checked, and it is true. The New York Times story on June 3 explains what is happening at Disney and elsewhere all over the world. This is just another version of outsourcing — instead of shipping the jobs out, we bring the cheaper labor here. Insourcing the outsourcing.
It is, of course, the amoral free market/capitalism that makes it OK for “bidness” to do this in corporatist ’Murica.

Lest you think this isn’t close to home in Amarillo, take note that the H-1B visa was part of the Wallace Bajjali pitch that the City Council swallowed.

We need more critical thinking in our civic lives. More analysis. And we need a rage against the machine to take back our government, not by destroying and neutering it as the Tea Party would have us do; but, by empowering it to stand as a balance against the consequences of unfettered and uncontrolled capitalism.

Take this to the bank, so to speak: Our future generations depend on it.
Posted by George Schwarz at 8:58 AM