And open letter to NFL management and team owners 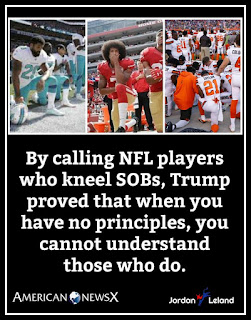 Donald Trump and the personnel in the NFL. And on Monday, the war has continued, dominating more important issues — except that Trump’s behavior is the most important issue of the day.

The war started with a right-wing based rally in Alabama tweet demanding that players who protested (by taking a knee or sitting) during the National Anthem be fired. As the Washington Post reported, “After making a thinly veiled allusion to former San Francisco 49ers quarterback Colin Kaepernick, who sparked a national debate by taking a knee before August 2016 preseason games to protest police violence against minorities, Trump called on NFL coaches to get the ‘son of a bitch’ players off the field if they continued to kneel. The president repeated his call with no less intensity on Twitter on Saturday and Sunday morning.”


We all know this is neither the first nor will it be the last time that Trump has been the Deplorable-in-Chief. During the 2016 presidential campaign, he insulted a Gold Star mother, made fun of a reporter with a physical disability, showed disrespect for a prisoner of war and insulted decent people by explaining he could freely grab a woman’s genitals.

Now, in taking on the protests, Trump is framing them as protests against the flag, the anthem and the country. He is going what fascist dictators do, something about which this nation was warned before Yahoo reported, team owners and managers issued statements over the weekend, all of which were far more civil that Trump’s attacks. No surprise there, either. 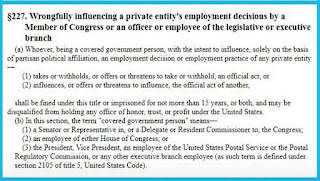 the election. He has also likely violated the law, at the illustration shows. In response, as

However, I am going to suggest that Trump, the Koch Brothers and the Mercer family along with the NFL owners who supported him won’t care about the mild rebukes. The only things that moves Trump are money and power. If the NFL and team owners really wanted to reign in Trump’s threats, their statements should have carried a stronger message. Perhaps, the message to Trump should read:

Your behavior toward our players and fans reflects that you’re mentally ill and you’re unfit to hold the office of United States president. We believe your juvenile temper tantrum is really an attempt to bring your brand of fascism to our country and that is unacceptable. Our dedication to our communities and to the principles on which this country was founded reinforce our message and because of those principles, we are neither afraid of you and your bluster nor your threats. Therefore, we will encourage those who can no longer tolerate your disrespect for our country to work for and contribute money to any opponent dedicated to neutralizing your agenda.