The Globe-News: from deplorable to pathetic 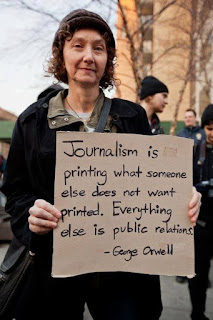 I almost had to call an ambulance this evening. Really. You see, I just read Robert Stein’s Amarillo Globe-News story, “Mayor wants to know who leaked information,” posted to the one of the news pages on the third-rate media outlet’s website. I had trouble breathing; I just couldn’t catch my breath from laughing.
As if Globe-News editorials weren’t bad enough, replete with poor writing and facts harder to find than a diamond in a Florida swamp, we now get an article that starts editorializing in the first sentence. Then, it goes on to whine in chorus with Paul Harpole, our Trumpian mayor, about a leak from a City Council executive session. Harpole’s panties are all in a wad because ABC7 Amarillo had a scoop from a confidential source on the council choosing a new city manager.
Harpole, who is of that Amarillo-type paternalistic ilk who think they know better than the citizenry which is mostly beneath them, is in high dudgeon about ABC7 Amarillo having information before Hiz Honor could control it as the hero of the staged news conference. In the past, that TV station has popped stories that angered Harpole: KVII broke a story about United Way a few years ago that set Harpole on a course of undercutting ABC7 Amarillo whenever he could. He usually passed news tidbits to the Globe-News when he got wind that the TV station was nosing around. It’s fair to say that the Globe-News has been one of Harpole’s useful idiots.