With more propaganda, no bottom to the Globe-News barrel

Once again, the Amarillo Globe-News spews Republican propaganda, this time about health care and the Affordable Care Act. Leading the charge is the Globe-News’ Dave Henry, poster boy for 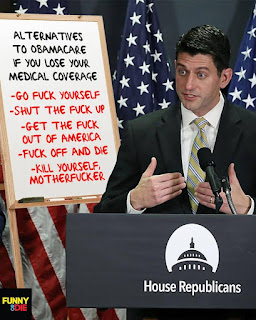 misinformation, disinformation and fake news. This time Henry’s column for Mondaymorning shills for Mac Thornberry, the Panhandle’s representative in the party of Putin. Calling his section in his column “A Healthy Alternative,” Henry quotes Thornberry’s Facebook page, “This week, the House and Senate passed budget resolutions that are the critical first steps to repealing and replacing Obamacare. This effort is at the top of our agenda, and we intend to make sure that it is done right. Americans deserve health care that is affordable, patient focused, and that saves the benefits that they have paid into.”
After 16 years of using Karl Rove’s propagandistic language of calling Social Security and Medicare “entitlements,” an apparatchik for the Trump/Putin administration now concedes that people having been using their own money to pay premiums. But the backbencher marionette Thornberry does his own regurgitating of the GOP talking points. With eight years under its belt of carping about replacing the ACA, no one in the party of Putin has proposed another plan. Thornberry goes along with the propagandizing because he, like the rest of his ilk, don’t really care about the people who need heath care. Hell, they don’t care about anyone in need or poor.
What makes Thornberry and the rest of the Republicans premeditated murderers is that they know, and we know, people won’t be able to afford diagnosis and treatment and then they will die. Yes, die. Adding to the disgusting stupidity, these miscreants are going to cut off the money to the insurance industry, BigPharma, medical equipment manufacturers and health care providers. Wait till that splatters against the fan. And who will be hurt the most by all this? The Trump/Putin supporter.
There is more, of course. Henry then contributes in his typical ignorant and uninformed way, maintaining the dishonorable tradition of the Globe-News building as a fact-free zone. It’s no surprise, but Henry makes two statements he can’t back up with systematic data. First, the assertion that the ACA is a failure and has not delivered on PRESIDENT Barack Obama promises.
Obamacare has been a failure, and has not delivered the promises made by Barack Obama.
If Henry had bothered, he could have asked Google to find this set of links. Suffice it to say, double-digit millions of people now have health insurance. And since the Democrats needed to make concessions to the insurance industry to pass the ACA, it’s not really the president breaking promises. It’s the very corporatists with whom Henry and his kind are allied that have broken the promises by setting up networks and excluding some providers. The real statement the president should have made is, “If you have your own providers, you can keep them if the insurance company lets you.”
As for his last statement (below), it is at least six years past time for an alternative. The former Republican Party’s 2012 standard bearer, Mitt Romney, led the health insurance reform in Massachusetts when he was the governor of the Bay State — the GOP governor. It was, in part, a model for the ACA. In fact, if the Trump/Putin party want a conservative alternative to “Obamacare,” they can have RomenyCare.
And, note something else important and part of the M.O. for the Globe-News, Henry and the current Trump Party as well as those Republicans who put party and agenda above country. As part of the standard propaganda ploy, they refer to “a federal failure in taking over health care.” RomneyCare and the ACA were no such thing. They were insurance reform. Those programs set up protections from insurance companies. Neither program took over health care nor imposed specific practices on health care providers. As it has been for years, insurers have done that.
It is time for an alternative, and we are anticipating what Republicans will do to improve on what has been a federal failure in taking over health care.
As we can tell from what happened under cover of night — what an insult to our form of government — the party of treason has no alternative and there is nothing to anticipate but illness, death and a weakening of our people. And as the younger generations Americans raise children in this upcoming dystopia, our national security will suffer as we try to staff our military with weaker personnel.
One can only wonder what the supporters of this right-wing takeover of our government have to gain and why they brush off cruelty and embrace regression. Is it greed? Or is it perversion? And why do the Republicans, the Amarillo Globe-News, which posts a daily Bible verse and wraps itself in the banner Christianity, act so un-Christian?
Posted by George Schwarz at 11:14 PM