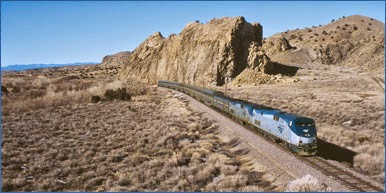 The bad news for Amarillo broke in the Santa Fe New Mexican at 8:30 p.m. Saturday. Amtrak’sSouthwest Chief will remain on its route through Kansas, Colorado and New Mexico. The hope for a reroute from somewhere in Kansas along the Burlington Northern Santa Fe Transcon is not happening according to the story in the New Mex. The upshot is that Amarilloans will not see train travel in the foreseeable future and the city leaders now much figure out what to do with the old Santa Fe station on which they spent millions of taxpayer dollars.
The rules changed a bit, it seems. The three states originally faced a Jan. 1, 2016 deadline to pony up money to contribute to BNSF’s track maintenance costs. Now, there is no deadline. The Santa Fe newspaper quotes Amtrak spokesman Marc Magliari as saying, “We are making progress. There is no imminent cutoff date. … We do not want to move this train to another route.”
The Chief’s two-night daily trips between Chicago and Los Angeles travel some of the most scenic and iconic parts of the American West — the towering Rocky Mountains and the enchanting desert Southwest. The route also echoes the halcyon days of train travel when the luxury Santa Fe Super Chief plied the route, stopping along the way at the famous Harvey Houses.
Posted by George Schwarz at 10:05 PM